Research and collection by BlueArt.ch 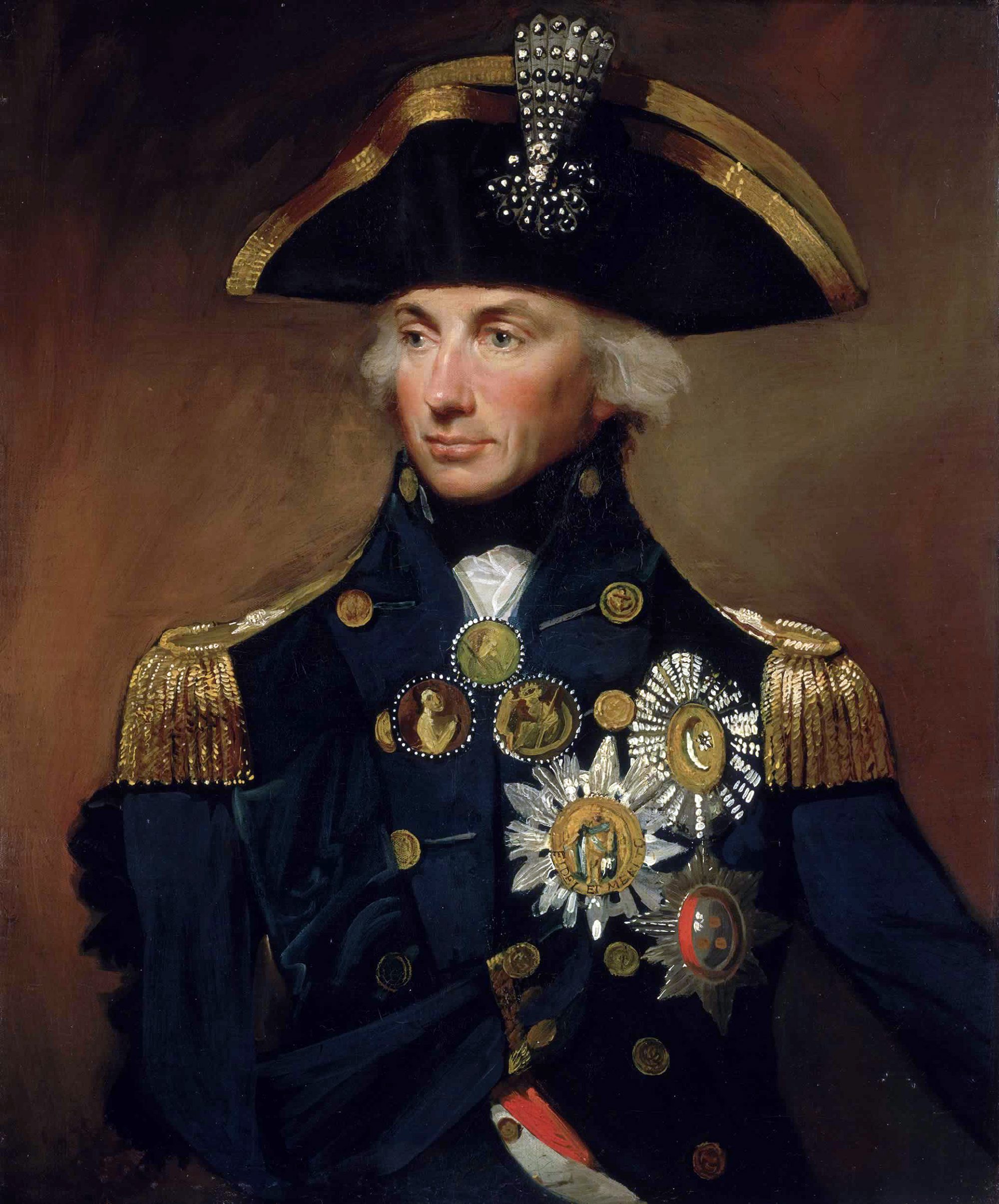 Admiral Horatio Nelson (1758 – 1805) called Lord Nelson, was a British flag officer in the Royal Navy. He was noted for his inspirational leadership, grasp of strategy, and unconventional tactics…

Who discovered the continent America coincidentally...

A British sailor and explorer who commanded three exploration voyages...

He ran away to sea when a boy and served for 73 years at the Royal Navy...

A captain who set many records in maritime history... 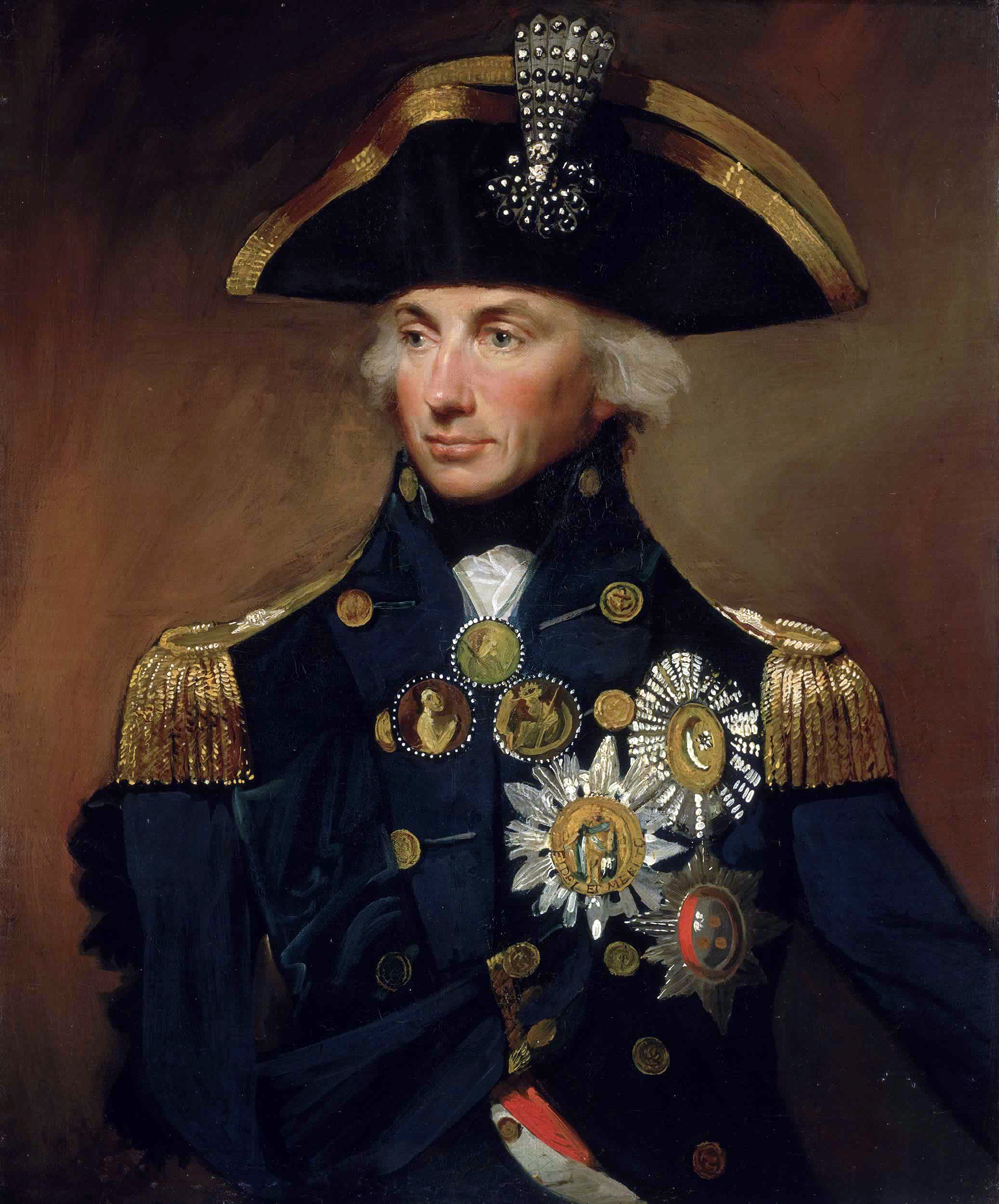 Admiral Horatio Nelson (1758 – 1805) called Lord Nelson, was a British flag officer in the Royal Navy. He was noted for his inspirational leadership, grasp of strategy, and unconventional tactics, which together resulted in a number of decisive British naval victories, particularly during the Napoleonic Wars. He was wounded several times in combat, losing the sight in one eye in Corsica and most of one arm in the unsuccessful attempt to conquer Santa Cruz de Tenerife. He was shot and killed during his final victory at the Battle of Trafalgar near the port city of Cádiz in 1805. 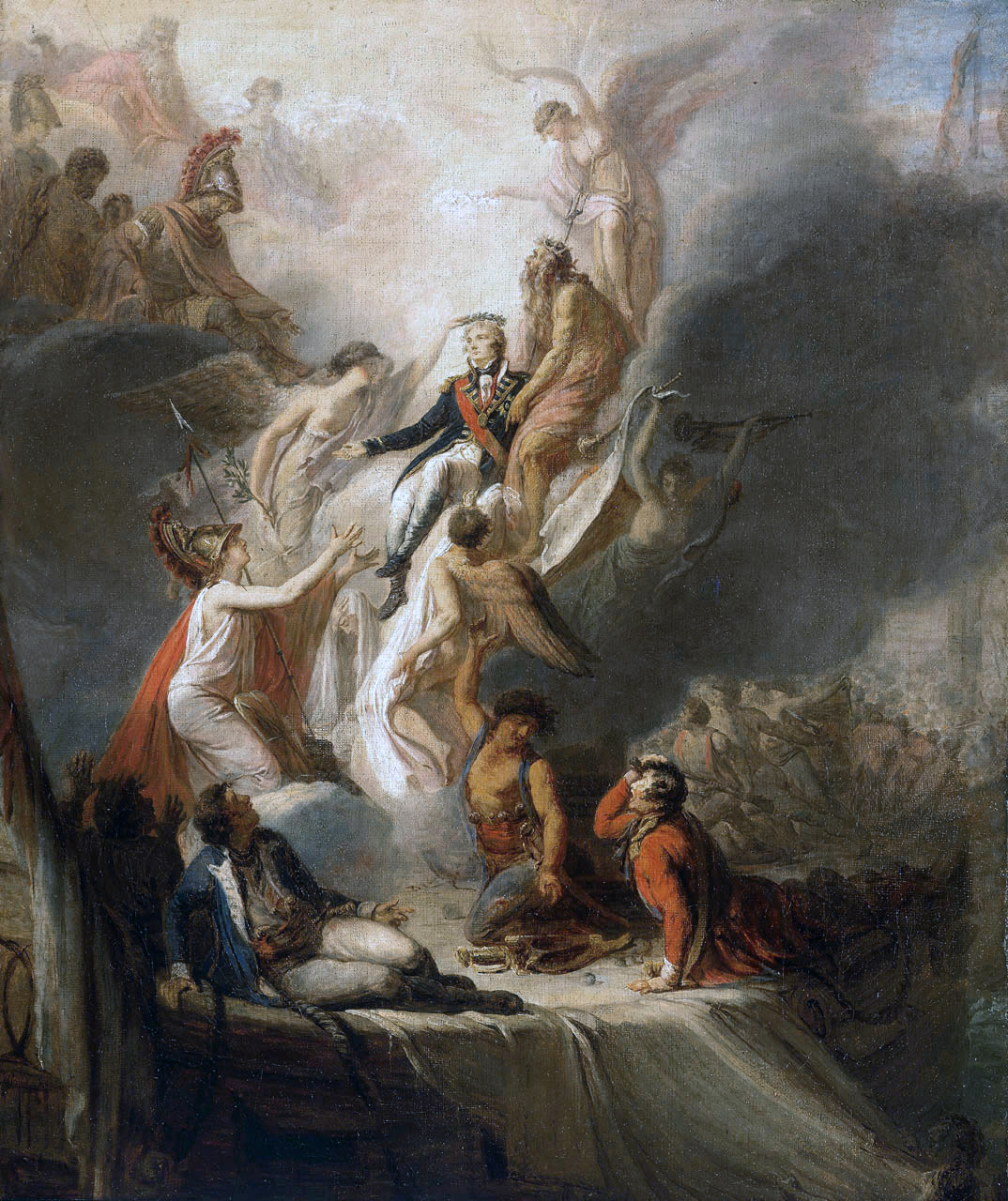 As a commander he was known for bold action, and the occasional disregard of orders from his seniors. This defiance brought him victories against the Spanish off Cape St. Vincent in 1797. Over the period 1794 to 1805, under Nelson’s leadership, the Royal Navy proved its supremacy over the French. At the Battle of the Nile in 1798, he successfully destroyed Napoleon’s fleet. Before the battle at Trafalgar on 21 October 1805, Nelson sent out the famous signal to his fleet ‘England expects that every man will do his duty’. He was killed by a French sniper a few hours later while leading the attack on the combined French and Spanish fleet. The battle raged at its fiercest around the HMS Victory, and a French sniper shot Nelson in the shoulder and chest. The admiral was taken below and died about some minutes before the end of the battle. Nelson’s last words, after being informed that victory was imminent, were “Now I am satisfied. I have done my duty.”

His body was preserved in brandy and transported back to England where he was given a state funeral. Nelson, hailed as the savior of his nation, was given a magnificent funeral in St. Paul’s Cathedral in London. A column was erected to his memory in the newly named Trafalgar Square, and numerous streets were renamed in his honor. 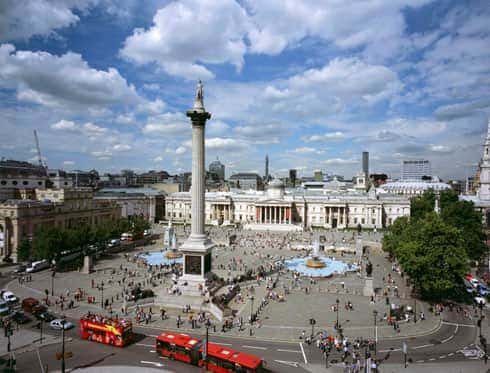 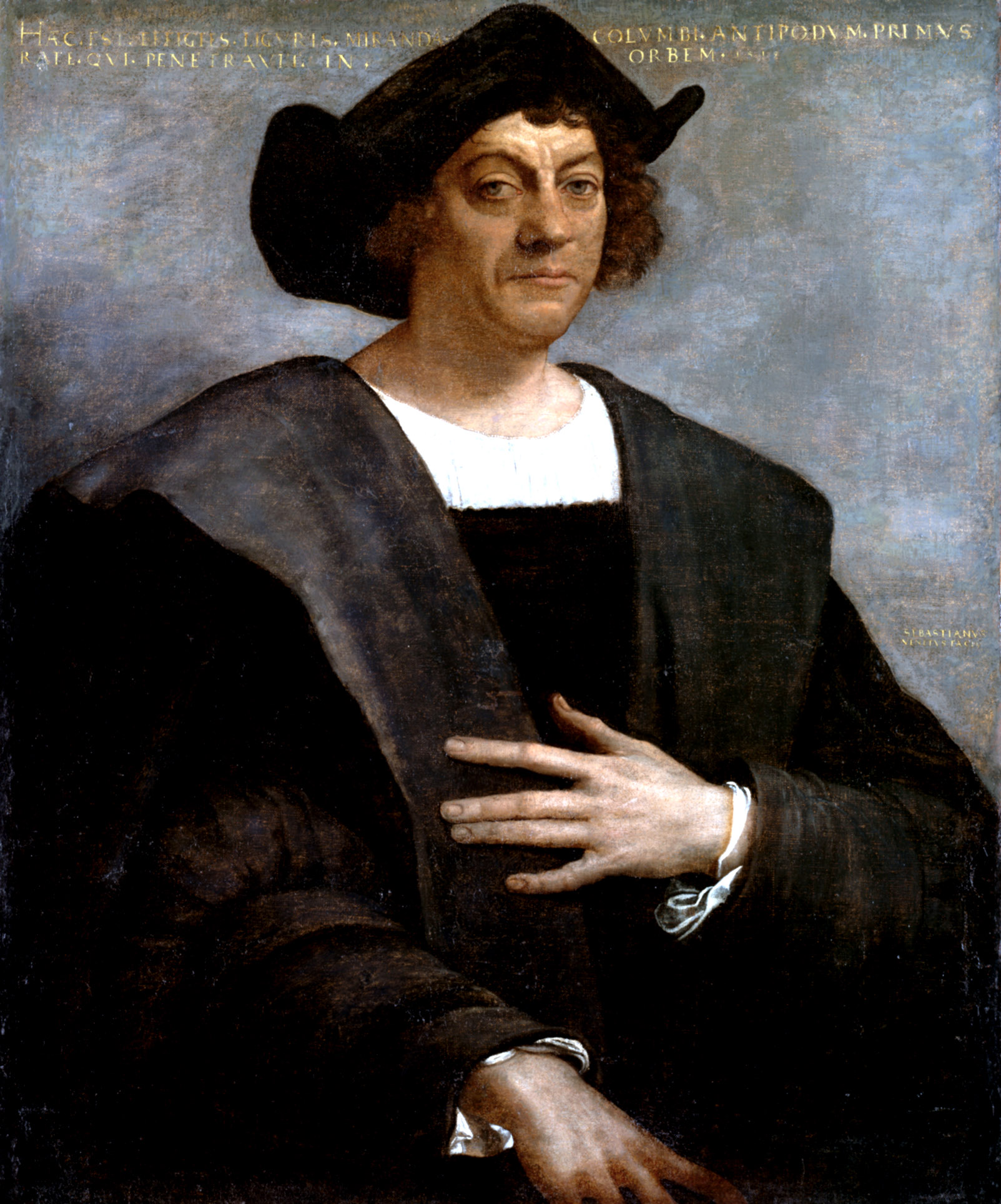 As in the classroom we learned, Christopher Columbus sailed the ocean blue in 1492 and discovered America. But there is more to the story of the explorer. Christopher Columbus (1451-1506) was a merchant and sailor from Genoa, Italy. He was tasked by the kingdom of Castile (part of Spain) to find a way westward to India. Nobody knew that passing through the Atlantic Ocean will arriving in America instead of Asia. He never knew that he had discovered an unknown continent. 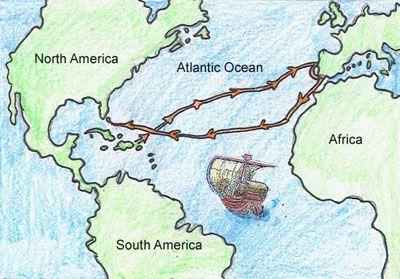 On August 3, 1492, three Caravels ships, led by Christopher Columbus at his famous Galleon ship named Santa Maria ship and 90 sailors, left the port of Palos and set off in the open waters. At the beginning, the situation looked good and the sailors were completely commanded by Columbus, but after a few days when the coast disappeared below the horizon, they gradually became scared. Until then, all the ships that traveled in the Atlantic Ocean were on either side of the northern or southern route, and were always on the coast of Europe or Africa near them. But now they were heading to the unknown central part, where, according to the populace, was full of terrible monsters, and the severe storms blocked the way to the ships.

But Christopher Columbus continued his journey despite all the difficulties he faced. With his imagination, they came to India from another direction but the truth was that they step on a new continent, later named “America”. For this reason, indigenous tribes – and nowadays original Americans are still called Hindus. 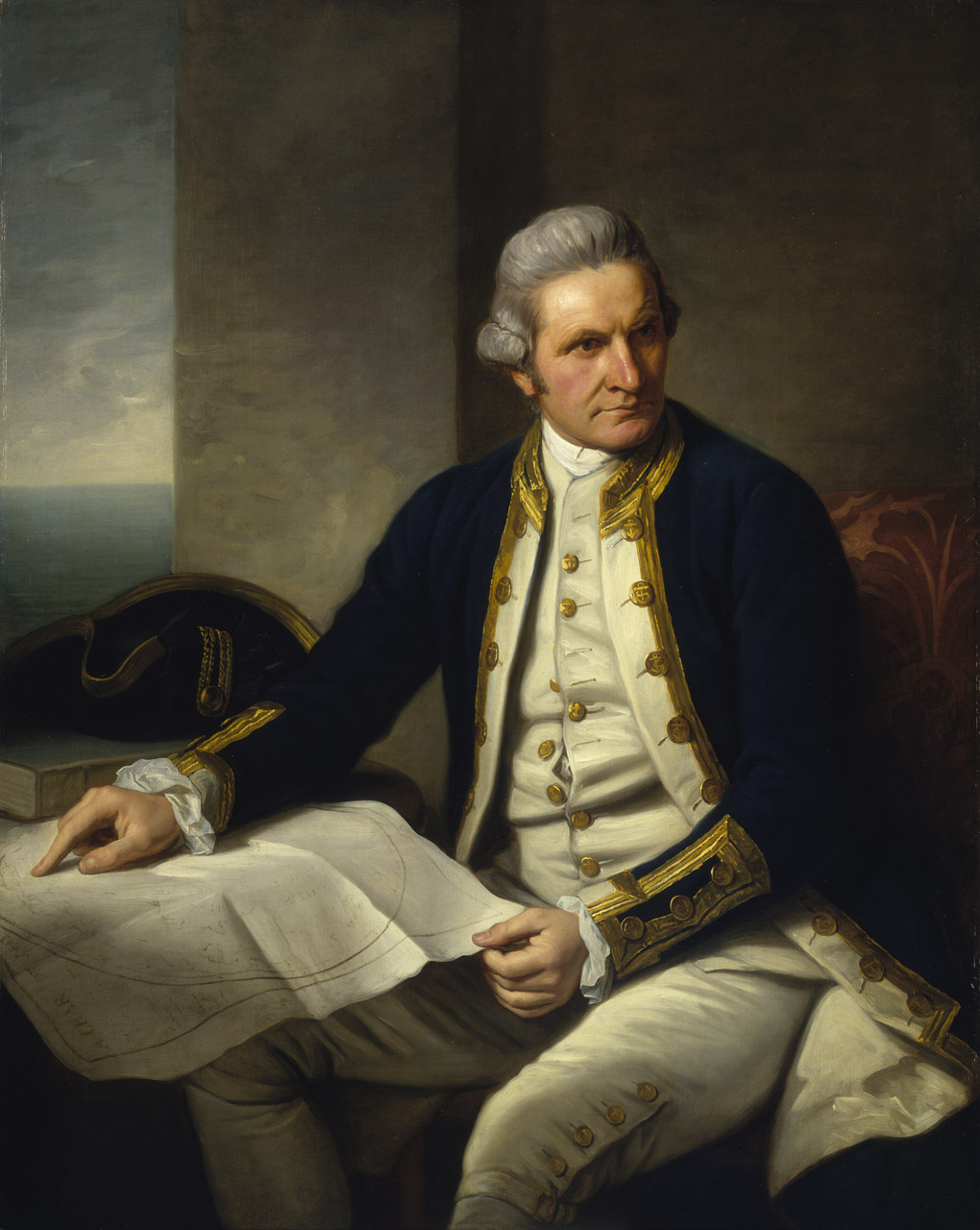 James Cook, a British sailor and explorer (1728-1779). He commanded three important exploration voyages, during which many of the major islands of the Pacific, such as Australia, New Zealand and Hawaii, were identified and mapped. Cook’s courage to explore high-risk areas, such as the Antarctic Circle and the Great Barrier Reef area, the ability to lead people in difficult and skilled conditions in maritime, land surveying and mapping techniques, makes him one of the most successful explorers of his time. James Cook University was founded in honor to he in Townsville, Australia. 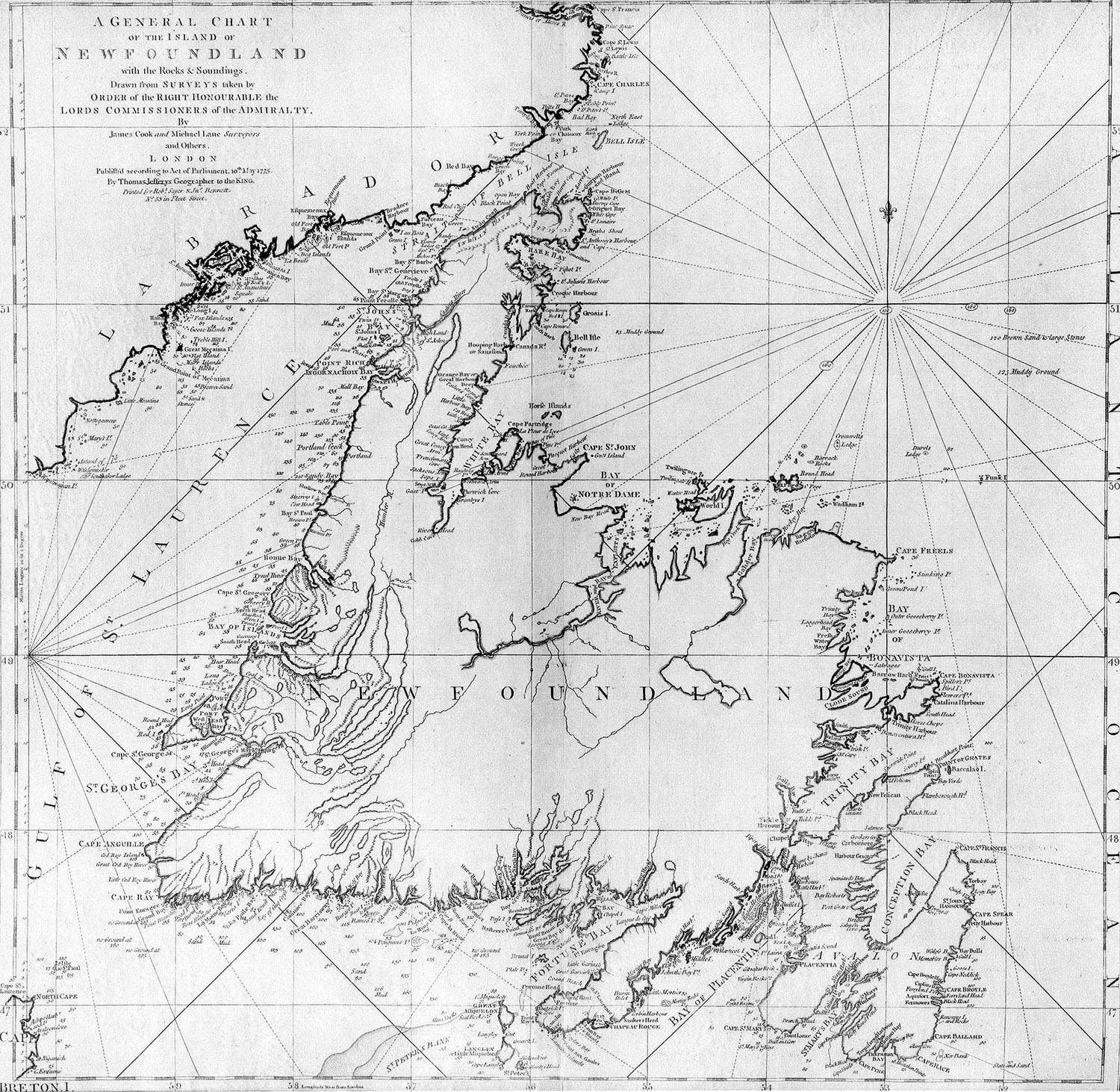 In 1769, the Royal Society commissioned Cook, to go to the Pacific to track down and record the passage of the Venus Planet from the sun. He chose the ship Endeavour for this trip. The 94-member of exploration Committee led by Cook left the port of Plymouth on August 26, 1768 and landed on Tahiti Island April 13, 1769. At the command of Cook, a small Fork and an observatory were made at the site. On June 3rd, the Venus Planet’s Transition Observation Mission to the Sun was successfully completed; However, due to lack of advanced scientific tools, precise measurement of this phenomenon was not possible. 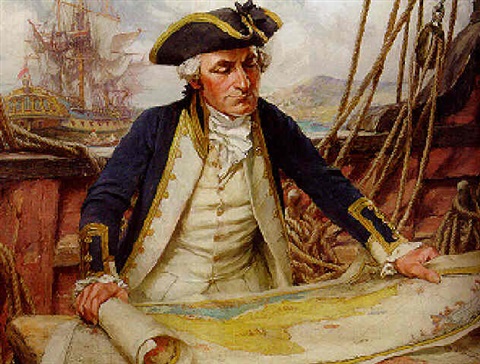 In the eighteenth century there were scattered reports to Europeans that in the southern hemisphere, there is a large continent, called Terra Australis. The Royal Society, and in particular its member Alexander Dalrymple, believed in the existence of this land, and ordered Cook to search for the continent following the completion of the Venus Planet Earth Observation Mission.

Cook used a Tahitian known as Tupaia, who was familiar with the Pacific Ocean. With the help of him, they came to New Zealand and for the first time Cook mapped out all of the coastline of this island. In his map, there are only a few minor mistakes. (For example, the peninsula Banks is taken as a island, and Stewart island is part of the southern island). He also discovered the Strait of Cook, which separates North Island and New Zealand’s Isle; what the Abel Janszoon Tasman, in one century earlier didn’t recognized.

Cook then drifted westward to Australia, exploring the eastern coast. Explorers landed on the Gulf Coast, and for the first time they were given the opportunity to comment on Australian plants and beasts and meet with the Natives. This place, the first British colonial area in Australia, had a very varied vegetation; therefor Cook named it Botany Bay.

After leaving the Gulf, Cook continued his route along the coast to the north. An incident during the trip led to the discovery of the Great Barrier Reef. But on June 11, 1770, his ship stuck into one of these underwater cliffs. The ship saw a lot of damage from the collision and inevitably led the river mouth (now called Endeavor) in the northeast of Australia. The ship repair lasted about seven weeks. The exploratory team took this opportunity to examine the status of the local inhabitants and the plants and animals.

After preparing the ship, Cook drove back and crossed the Torres Strait between Australia and New Guinea, traversing the western route and bypassing the Cape of Good Hope and after about three years of voyage they returned to Britain. Cook’s notes were immediately published, and although he was a great hero in the scientific circles, he was more generally recognized by the nobleman botanist Joseph Banks. 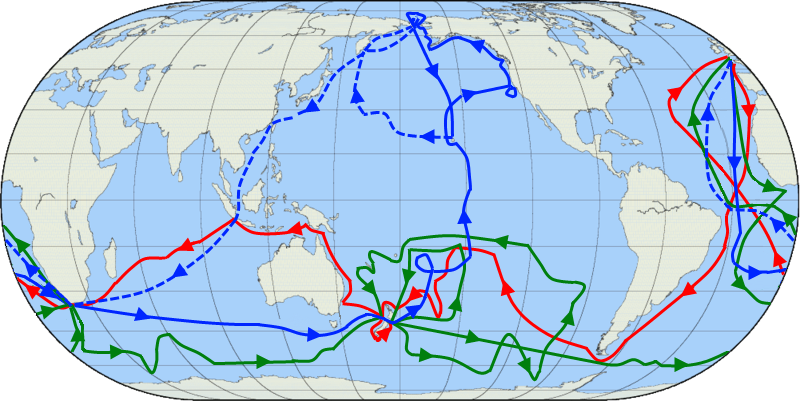 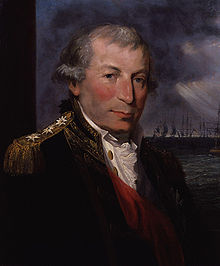 Admiral John Jervis (1735-1823) entered at the early age of thirteen the Royal Navy, and served for 73 years. He was one of the brightest ornaments and winning many famous victories; an extraordinary record.

A noted English admiral, born at Meaford Hill, Staffordshire; ran away to sea when a boy, and by gallantry at Quebec in 1759 and otherwise rose rapidly in the service; commanded the naval attack upon the French West Indies (1793), and four years later, as admiral of the Mediterranean fleet, shared with Admiral Horatio Nelson the honours of a brilliant victory over the combined fleets of France and Spain off Cape St. Vincent; was created an earl in reward (The Earl of St Vincent). 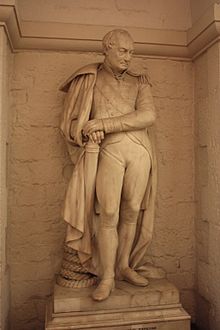 In the last years of his life, due to his poor health and since he remained childless with his wife Martha who died in 1816, he withdrew more and more from public life. In the course of the coronation of George IV in 1821, he was appointed to the highest dignity in the Royal Navy, Admiral of the Fleet. Since Jarvis had no heirs, he donated a large portion of his assets to war survivors. He died on March 14, 1823 in Rochetts. At least three ships and two stone frigates (Informally, a stone frigate is a naval establishment on island) have been named HMS St Vincent either in honour of the Earl or after that battle that he won. 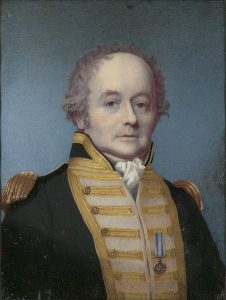 William Bligh (1754-1817) was an English naval captain whose presence on more than thirty ships has been recorded in history. But mostly best known for his voyage on HMS Bounty, he had a career fraught with controversy.

At 7 Bligh went to sea as a cabin boy and in 1770 joined the Royal Navy. Between 1776 and 1780 he was master of the HMS Resolution on James Cook‘s third voyage. In 1787 the British government dispatched Bligh to Tahiti with the Bounty to collect breadfruit plants in order to provide cheap food for West Indian slaves. The voyage to Tahiti was difficult. After trying unsuccessfully for a month to go west by rounding South America, Bounty was finally defeated by the notoriously stormy weather and opposite winds and forced to take the longer way to the east around the southern tip of Africa. That delay caused a further delay in Tahiti, as Bligh had to wait five months for the breadfruit plants to mature sufficiently to be potted in soil and transported. 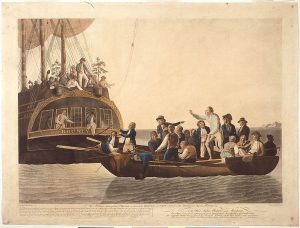 The sailors on the HMS Bounty found Tahiti to be a paradise. Nice nature, beautiful women, delicious food and the hospitality of the islands natives causes a mutiny against captain Bligh. Reluctant to leave Tahiti, the crew, led by Fletcher Christian, fired the Captain Bligh and 18 crew who were still loyal to him and threw them from the ship on a boat with some initial supplies without any maps. However, Bilgh carried out a great feat by sailing more than 3,500 nautical miles for forty-seven days until arriving at port of Kupang city in Timor island, losing only one of his eighteen loyal sailors. Finally in 1790, he sailed again to Tahiti and successfully introduced breadfruit plants into the West Indies. 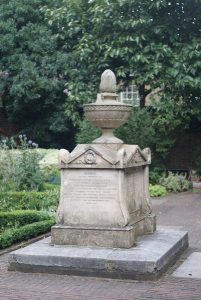 Between 1795 and 1802 Capt. Bligh saw action against the French at Camperdown and at Copenhagen, where he was commended by Admiral Lord Horatio Nelson. Contributions to navigation and natural history resulted in his election as a fellow of the Royal Society in 1801. Bligh arrived in 1806 with instructions to end the trading monopoly enjoyed by officers of the New South Wales Corps. In 1811 William Bligh returned to England. The following year, his wife Elizabeth died after 31 years of marriage. Before Bligh retired, he was promoted to Rear Admiral and Vice Admiral in 1814. After retiring from active service, he lived with his daughters on a country estate in Kent. His youngest daughter, Anne, born in 1791, was mentally disabled, never learned to speak and also suffered from epilepsy. Unlike some members of his social class at the time, Bligh had a very close relationship with his disabled daughter and took her for walks in a wheelchair until he finally died in 1817.

Manuscript of the notebook from William Bligh is still available for at the National Library of Australia. There are many books, documentary and films related to the true story of the Bounty. “Mutiny on the Bounty” is a 1962 American Technicolor epic historical drama film released by Metro-Goldwyn-Mayer, directed by Lewis Milestone and starring Marlon Brando, Trevor Howard and Richard Harris. 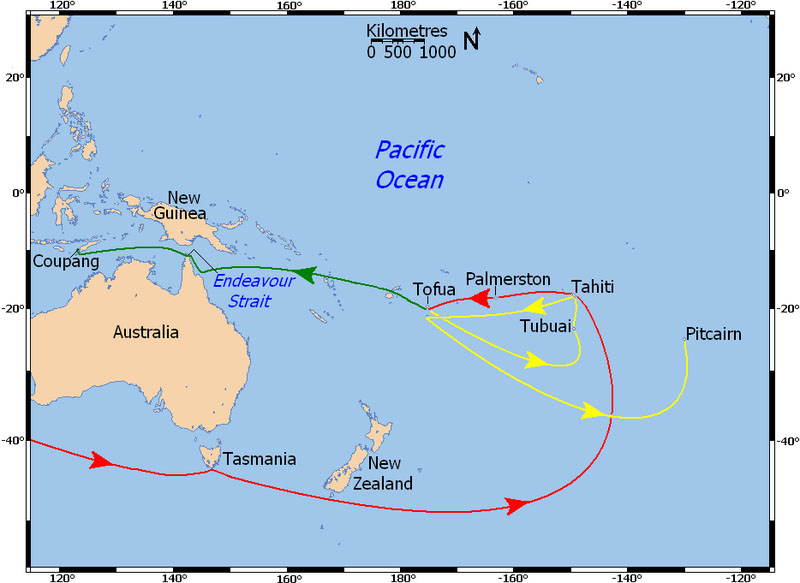